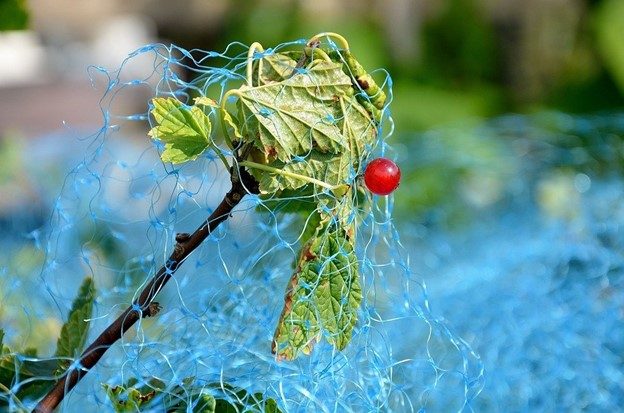 Bird netting or anti-bird netting is a form of pest control to keep birds away and from interfering with a multitude of crop types. It is basically a form of protection netting that prevents birds from pecking or eating different fruits and vegetables, etc.

What Does Bird Netting Do?

Bird netting can do everything from controlling bird pests and stopping massive crop damage to animal protection. They’re mainly used by farms and aquaculturists that use them to prevent excessive losses to their business. Bird nettings come rolled up packages. They can even serve the needs of backyard gardeners as well as independent farmers.

The chief purpose of any netting is to effectively control any damage caused by birds. Bird nets prevent vegetables and fruits like strawberries, blueberries, grapevines, peaches, plums, nectarines, figs. It also protects crops as well as seedlings from being picked apart or ruined by birds. However, birds aren’t the only source of pestilence that the netting controls. Bats have also been known to and can also cause a lot of damage to fruits like apples and mangoes and pears.

Certain birds like grackles and ravens can pose a threat to plant life. They not only inundate trees as well as other plants, but they also produce a lot of excrement. That is neither good for the plant life, crops, or the ecosystem. The uric acid in the excrement isn’t just bothersome; it corrodes metals, paints, and other materials. This costs farmers and crop growers hundreds or even thousands of dollars in repairs. In comparison, getting bird netting to prevent that damage is a much better alternative.

However, most importantly anti-bird netting helps to prevent birds and other pests from making their homes in those trees. These include apple trees, orange trees, lemon trees, pomegranate trees, avocado trees, banana trees, etc. essentially, the nets act as bird roost preventers. And then, of course, there’s disease. There are about sixty known diseases that birds can carry. For example, pigeons are carriers of diseases like tuberculosis, influenza, Toxoplasmosis paratyphoid, Lyme-ailment, and Encephalitis. That does not take into account the many hundreds of known diseases that bats have been known to carry.

These diseases can infect your customers and lead to your business being blacklisted among suppliers. The better alternative is installing bird netting to prevent this in the first place.

Even if a small portion of a fruit or vegetable or crop is bitten off, affected, harvesting, and selling it becomes impossible. This can lead to the harvest or crop no longer being a commercially viable product. If it is harvested, there is a huge chance that the fruit is carrying bacteria from the bite. It can also carry rot or ferment, which damages the harvested case.

This is why bird protection netting is usually applied to stand-alone trees including pears, grapes, apples, peaches, etc. They can even be installed on the side ventilation windows of growing tunnels. For fruits like strawberries, cranberries, and raspberries or blueberries, that is ideal.

When you think of Bird Netting you probably don’t think of the other applications or uses it can be utilized in but they can also be used to protect fisheries, ponds, and pools as well. So yes, Bird netting is a fantastic way to stop predatory birds from picking off small fish and devastating the ecosystems of fisheries, Koi ponds, or any fish life you would like to protect.

Aquaculturists also use nets to preserve tilapia and shrimp farms, only to mention a few. They protect the farms from marauding birds and even local birds. These include pelicans, herons, seagulls (of course), and cormorants, due to the strength of our commercial bird netting.

Bird proofing buildings can also become very necessary since they are vulnerable to birds flying in and becoming a real nuisance. For urban bird species that are known to be more adaptable to the city’s life, bird proofing in these troublesome areas is becoming more mandatory.

The benefit of this is; it provides a barrier that is more or less impenetrable which protects premises without actually harming birds. In these instances, the netting can be a very effective deterrent for large, open areas like roofs and even loading bays. Of course, design considerations have to be taken including the type of material used and the fixings being utilized. It basically has to be optimized for the bird species that have to be kept out. All of this can be seen & ordered on our Bird Netting Page.

Miners usually use chemical agents that help with the extraction of minerals or metals from crushed rocks. The chemicals are always harmful to the human body. They need to be kept confined from volatile species and sensitive animals, which include migratory birds. In this case, the bird netting is used to protect birds.

The US government specifically requires that all ponds containing cyanide should be covered at all times with nettings or other forms of protection to prevent loss of wildlife.

Netting is used by everyone from private gardeners to farmers, crop owners, and aquaculturists. Its worth has been proven to many professional growers, farmers, gardeners, aquaculturists, and many others that prefer it over alternative chemical, invasive or destructive solutions.

Bird netting is a great solution for protection against any type of bird. Pigeons, gulls, sparrows, starlings, etc. can all be kept out. It’s also extremely versatile and can be fitted to pretty much any size that you need to cover. So whether you have a vineyard or a large orchard, you’re literally covered.

Bird netting is also a great way to protect structures. If you have a special enclosure in which you’re breeding crops or a fishery that is specially made, bird-netting protects it. What’s more, the netting will last many years without the need for replacement. This will save you thousands of dollars in damages throughout many years. For farmers, crop growers, and aquaculturists, this is a boon that will help their businesses grow.

Netting is also a great option to keep birds safe. It’s an alternative to installing harmful bird traps, etc. that doesn’t hurt them at all. Simply by keeping them away from the produce, it does its job.

Finally, bird netting is virtually invisible when installed correctly. Green netting, for example, is excellent for installation in any garden, field, or orchard. It naturally blends in with the surroundings and acts as its own camouflage. The sheer surprise that birds will experience when they come up against the netting will scare them away.

In addition to the ever-present local bird species, migratory birds can present a significant problem for crops that lie in their path. If they’re part of a generation of migratory birds that fly over the same land, they may dive at the opportunity of a free lunch.

However, changing migratory patterns due to climate change and land development may force birds to fly over your crops. That’s why you should choose bird netting to protect your orchards and fisheries in case of a surprise bird invasion.

What is the Best Type of Bird Netting?

The best type of netting depends on your situation of course. The type of material used, the length, the hole size, etc. are all relevant to your situation. However, there are ways to ensure that you make the best choice depending on your situation; whatever it may be. So, here are several tips to follow to make the choice of bird netting easier for you.

Over the Row Netting

This is the traditional kind of netting that is used in the US. It is used to drape over a row or multiple rows of vines. The width of the netting matters tremendously here, since the larger your crop, the wider the netting needed. It is usually made of black plastic or woven mesh.

They protect grapes, strawberries, blueberries, grapevines, peaches, plums, nectarines, figs, etc. for weeks and even stop the birds from pecking at the tendrils, vines, and berries.

Overhead nets are exactly how they sound, they are placed over the orchards, crops or vines. They are a proven method to protect any crop or orchard. The typical installation has additional wires strung from post to post down the row of vines. The net rests like a roof atop the wires. In this regard, it’s more like a cage composed of a net.

With the net so far above the trees; at least 12 inches away from the fruit your strawberries, blueberries, grapevines, peaches, plums, nectarines, figs, etc. are safer than ever before.

The clear advantage of the overhead bird netting is that the net can be raised at the end of the rows. A tractor or a truck can then be easily driven into the vineyard rows underneath the protection netting canopy.

Side netting is a more concentrated netting. It covers only the fruiting zone of the vine and is very popular in Australia and New Zealand. It’s popular in eastern regions of the US as well. The nets are easier to apply than over the row netting and not as expensive since there’s less netting.

Some side netting can be rolled up and left year-round in the vineyard. However, it’s important to secure the netting above and underneath the fruiting zone. If not, then the birds will figure out how to get to the crop despite everything else.

A larger netting mesh size works for preserving fisheries since it is more resistant.

How to Get the Best Type of Bird Netting?
Aside from the type of netting you buy, there are things to check like hole size, shape, and material type.

The size and shape of the holes affect the strength of the net. It also affects which birds are kept away from the crops. Square holes have a single stitch at each corner. Hexagonal holes have three per side. Some nets even use triangular holes and have smaller hole sizes. Knitted nets aren’t recommended since they unravel which they’re cut on even one side.

For side netting, short rows are the easiest as they allow the use of the netting in much wider applications are easier to move transport & install due to their small size. Over the row netting, can be applied from a spindle which is mounted on a tractor. It can also be applied using other equipment on a farm. For overhead netting, different types of equipment are required because of the application of mounts.

Netting is not only the best sure-fire way of preventing pestilence from birds and bats, it’s also the cheapest. It will prevent you from losing hundreds of thousands of dollars over several years. Seeing that it costs just a couple of hundred bucks including installation makes it essential for any food growing business.

How Useful is Bird Control

Educating Yourself About Bird Netting